Is there such a thing as Anthropocene photography? If so, what do these photographs look like?

Initially, I thought the answer to this question was yes, and understood them as a subset of environmental photographs, specifically photographs which deal with the negative impacts that humans are having on the environment. Though Anthropocene photographs would deal deliberately with large scale. So Edward Burtynsky’s Water or Mishka Henner’s Feedlots would fit this description.

Scale, both physical and temporal, seemed like an appropriate qualifier for a category of Anthropocene photographs. It was a common thread running through the 2011 slideshow Age of Man produced for National Geographic, which curated a selection of photographs showing indicators of the Anthropocene: huge skyscrapers, acidifying oceans, acres of oil pumpjacks, coal mountain top removal, near extinct fish pointing to the sixth mass extinction, fields of industrial agricultural land, chemical runoff, dammed rivers, invasive spreading of exotic plants, industrial waste, and waves of urban sprawl.

Nothing is occurring at local or human scales anymore it seems, it is all industrial, machinic, and planetary. 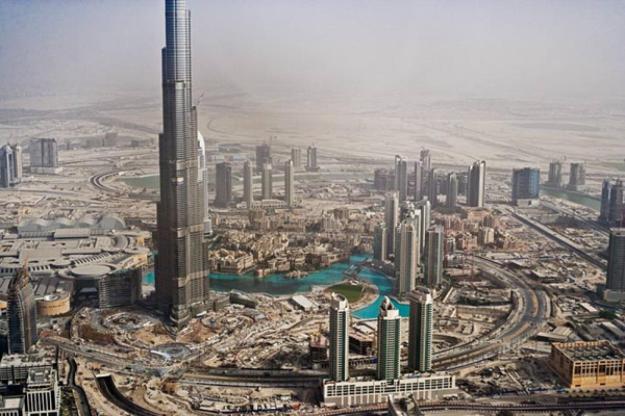 Though this categorisation is perhaps lazy and superficial, not serviceable enough to capture the full complexities of the Anthropocene. Yes, cumulative human activity is now occurring on a geological scale, though yet to be formalised by geologists, but what is being left out of this picture?

Part of the problem of trying to establish if an Anthropocene photograph exists is the vagueness of the term Anthropocene when used outside of geology. The Anthropocene as a concept is vague. According to Dipesh Chakrabarty it reflects a general mood that humans are becoming too dominant. So what do photographs that capture this mood look like? what exactly is the mood?

Clues to Anthropocene mood can be found in both the adoption of and resistance to the term itself. Which in turn reflects back on a general mood towards the Human collective.

Non-critical adoption of the term has been described as legitimating a thesis which obscures the fact that not all humans are equally anthropogenic and which distracts from the capitalist system which is responsible for much environmental harm. In response to the latter criticism, the Capitalocene is offered as an alternative and more fitting name for the new epoch.

Edward Burtynsky’s Oil Fields #27 is offered up as an example of the Capitalocene mood. And it is judged harshly, monstrously, for naturalising petrocapitalism with its visual beauty.

It’s tempting to draw a line connecting fossil fuels, capitalism, and climate change and to make this the focus of the Anthropocene mood. Though it can only ever be part of the complex. We could substitute fossil fuels for renewables in the chain of cause and effect and speculate about what type of environmental impacts (and worse, externalities) this swap might result in. Even if we crossed out all of the terms, we would probably still have the greenhouses of Almira.

So what of the anthropos, the humans of the Anthropocene and the inherent unfairness of lumping us all together under the collective Human. Here Burtynsky shows us a less comfortable photograph, which might help give some personality to the impersonal faceless anthropos, of young Chinese workers taking a meal break while working at a textile factory in China. It is a dystopian display of uniformity and the industrialisation of people. 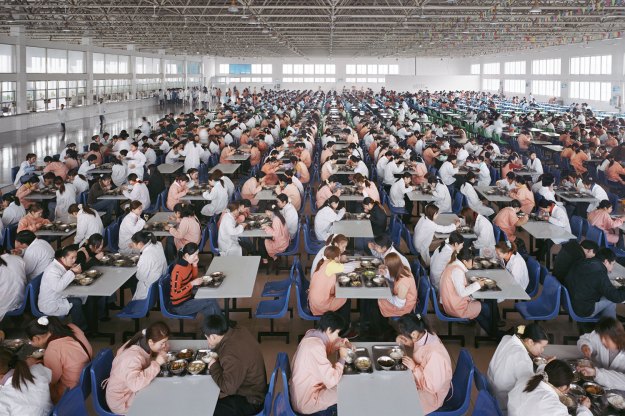 Bruno Latour has encouraged us to love our monsters, to not commit the sin of Dr Frankenstein and abandon the monsters we have created. If the photograph of workers at Youngor Textiles is an Anthropocene photograph and industrialisation is the monster, what does it mean to view it from a position of love? Would love ask to change the conditions that these workers worked under? Would there be slides and bean bags and more room to move in this enormous mess hall? Would love want to know how much these workers were being paid, what they were making, and for whom?

From resistance to the Anthropocene term to its enthusiastic adoption, the ecomodernist position revels in the power of humans to remake and protect the environment. One of the photographs chosen to represent this unashamedly optimistic mood is of the Hong Kong skyline from above surrounded by trees. It depicts the harmonious co-existence of human technology, industry, and capitalism, with a flourishing forest. Truly, we can have it all. Unless we cannot or that is not what is on offer and ecomoderns are still living in the Holocene.

With all of these photographs we are still dealing with scale, physical scales only though, not temporal. So perhaps temporal scales are best left to geologists, if we are able to comprehend geological timescales at all.

Noticeably missing from these photographs are the nonhuman. What happens to nonhumans in the Age of Man? How are they depicted, always as extinct or teetering towards it? In the above they are variously, water feature, exploited energy resource, food, and a backdrop to human commerce. In each case, passive and inert, malleable, and for us.

Is this a good thing? Certainly not. So, what is the status of the nonhuman in Anthropocene photography? Or should it be relabelled Chthulucene photography, to follow Donna Haraway’s suggestion.