There is growing recognition of the importance of images when discussing climate change. Though navigating the combined complex worlds of climate change and photography is a challenging prospect.

The Climate Visuals project has recently begun the task of trying to understand what photographs do, to whom, when they communicate about climate change. They identify seven core principles drawn from their empirical research which aid in getting people to care about the climate. They are: show real people, tell new (and interesting) stories, show climate causes at scale (avoiding individual reprehension), show local climate impacts, show emotionally powerful impacts, be careful with protest imagery, and understand your audience. Guided by these principles, Climate Visuals seeks to diversify and expand the visual culture of climate change beyond the icons of melting glaciers, hungry polar bears, and angry climate protestors.

This aim is echoed by Jill Hopke and Luis Hestre, and atmospheric scientist Katharine Hayhoe. Hopke and Hestre studied images on Twitter during COP21 and conclude that imagery needs to move beyond protests and international negotiations to images that “connect climate impacts to the daily lives of billions of people around the world.” Similarly, Hayhoe argues that “getting people to care about a changing climate doesn’t require adopting “new” values,” it involves communicating that climate change (which can even go unmentioned) is already affecting the things they care about in the here and now.

Expanding, complicating, and making more tangible and immediate our understanding of climate change through photography can only be a good thing. However, this project quickly runs headlong into two mires. The first is the long debated effects of photography when used to socially advocate and the second is ethical, what if “new” values is what responding to climate change requires?

These issues play out in a photograph from the Climate Visuals image library of a Syrian refugee asleep on an air mattress outside a train station in Budapest. 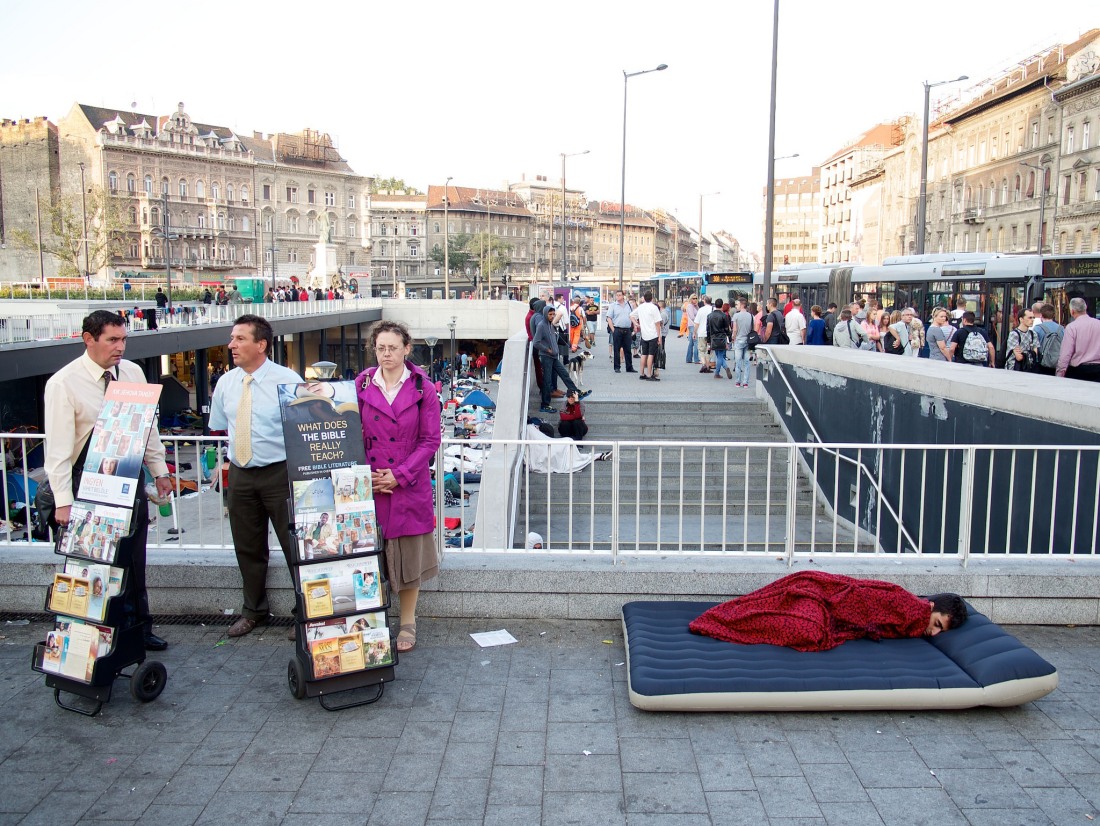 The central figure in this image is the woman in the hot pink trench coat. Being a Jehovah’s Witness, she is a stand-in for Christian values. To her left, under a clashing red blanket, is a sleeping Syrian refugee. Behind her in the train station below are many more refugees. They have few possessions, at most a blanket. The woman stands seemingly unmoved. As do the commuters boarding buses and going about their day. If these people choose to do nothing, what should be asked of me, a viewer thousands of miles away? “The rest of us are voyeurs, whether or not we mean to be” according to Susan Sontag in Regarding the Pain of Others.

The connection to climate change is not clear from the image, it cannot speak for itself on the issue. Climate change has been hypothesised as a contributing factor to the war in Syria, but the link is not firmly established. Recent studies have concluded that it is difficult to gauge or even not supported. Such uncertainty is likely to divide viewers, between those who see the link as intuitively true and those who use it to increase their scepticism about anthropogenic climate change.

Perhaps what this image more interestingly shows is two peoples, citizens and non-citizens. An artificial boundary inscribed by the institution of the nation state. And it glimpses the pressure that climate change will exert on such foundational ideas.